From the Page to the Stage: Women in Producing 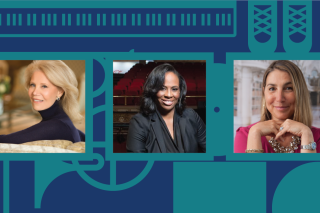 A talk about paths, career roadblocks, triumphs, and inspiration...

This event is free and open to the public.

All in the New Haven Community are invited to a lunchtime conversation with three of entertainment’s leading producers:  Broadway producer Daryl Roth, Apollo Theater Executive Producer Kamilah Forbes, and author-podcaster-publishing CEO Zibby Owens. These distinguished women in producing will discuss their career paths, roadblocks, triumphs, and inspirations. Bring a lunch with you. Or arrive early and purchase a lunch at Elm, our on-site café.

This event is free and open to the public.

Daryl Roth is an award-winning producer whose mission is to champion thought-provoking, inspiring work onstage. She holds the singular distinction of producing 7 Pulitzer Prize-winning plays: Anna in the Tropics; August: Osage County; Clybourne Park; How I Learned to Drive; Proof; Edward Albee’s Three Tall Women; and Wit. The proud recipient of 13 Tony Awards and London’s Olivier Award, her over 125 award winning productions include: Kinky Boots; Absolute Brightness; Angels in America; Between the Lines; Buyer & Cellar; Company; Curtains; Funny Girl; Gloria: A Life; Edward Albee’s The Goat or Who is Sylvia; Indecent; Into the Woods; It Shoulda Been You; Love, Loss, and What I Wore; The Normal Heart; The Tale of the Allergist's Wife; Twilight: Los Angeles, 1992; War Horse; and The Year of Magical Thinking. A Trustee of the John F. Kennedy Center for the Performing Arts and Lincoln Center Theater, she was honored to have been inducted into the Theatre Hall of Fame.

Kamilah Forbes is the Executive Producer of the Apollo Theater in addition to her work as an esteemed award-winning director and producer for theater and television. She is a powerful leader, widely known for her ability and commitment to continue to highlight the ideas, complexities, and work of artists of color and beyond. She was recently appointed by President Biden to serve on the National Endowment for the Arts Advisory Board. She has received awards for both directing and producing, most recently for her work directing HBO’s BETWEEN THE WORLD AND ME by award winning author Ta-nehisi Coates. For this work she was nominated for NAACP, Critics Choice, award and received a Gracie Award for her work as director.  Forbes’s Theater directing credits include Between the World and Me; By the Way, Meet; Vera Stark; All my sons; Blood Quilt; and Sunset Baby. The Howard University alum has also collaborated on The Wiz Live, A Raising in the Sun, Mountaintop, and Stick Fly on Broadway. She has produced many works for television, most notably the seventh season of the Tony Award and Peabody Award-winning series Russell Simmons presents Def Poetry on HBO.  Outside of her work at the Apollo, Forbes is slated to direct the Broadway premiere of Soul Train, alongside Questlove, Dominique Morisseau, and Camille A. Brown.

Zibby Owens is an essayist, memoirist, award-winning podcaster, book publisher, entrepreneur, and CEO. Owens founded Zibby Media, a privately held media company, in 2018, and the company has since grown to include the publishing house Zibby Books, the magazine Zibby Mag, and the podcast network Zibby Audio, which produces her award-winning podcast “Moms Don’t Have Time to Read Books." Owen’s daily podcast has become an essential destination for writers (she has interviewed more than 1200 authors on the show) and it recently surpassed 9 million downloads. Her advocacy on behalf of writers and their work has earned her the moniker “New York’s Most Powerful Book-fluencer” by New York Magazine. Owens is a regular contributor to ABC-TV’s "Good Morning America" and other broadcast outlets, where she shares her mission-driven enthusiasm for books. She is the author of the memoir Bookends: A Memoir of Love, Loss, and Literature, the children’s book, Princess Charming, and the editor of two anthologies on motherhood. Owens is a graduate of Yale University and Harvard Business School. She lives in New York with her husband and four children.