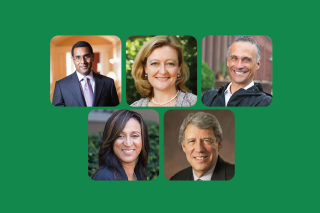 This event has passed. The video is now available.

Over the past few years, there has been much debate about the tensions between protecting free speech and creating an inclusive environment on university campuses. There are many interesting and unresolved questions in this area, such as:

To discuss these types of questions, two entities at the University of Chicago—the Parrhesia Program for Public Discourse and the Chicago Center on Democracy—have convened an all-star panel of five university administrators. In Free Expression on Campus, they will discuss how universities are working to resolve the tensions between protecting free speech and creating an inclusive environment on campus. We encourage you to register here.

The moderator will be Leila Brammer, Director, Parrhesia Program for Public Discourse. Panelists will include:

Sean Decatur, President, Kenyon College. Sean Decatur became the 19th president of Kenyon College on July 1, 2013.  Shortly after arriving in Gambier, he led the community in a yearlong conversation to identify the strategic initiatives that would propel the College into its third century. Under Decatur’s leadership, Kenyon has attracted its most diverse and academically talented incoming classes in history. Decatur is a lifelong champion for the liberal arts and an emerging voice in the national conversation about higher education.

Kimberly Goff-Crews, Secretary and Vice President for University Life, Yale University. Kimberly Goff-Crews is responsible for the university’s work to further diversity, equity, and inclusion in service of the university's mission, and ensures the alignment of policies and procedures to maximize support for all students. Ms. Goff-Crews leads Belonging at Yale, an initiative includes the university’s diversity, equity, and inclusion efforts and fosters a learning environment and campus community in which everyone feels a sense of belonging. Before assuming this position at Yale, Ms. Goff-Crews was vice president for campus life and dean of students at the University of Chicago. She also served as the dean of students at Wellesley College and as chief of staff to the president and director of planning at Lesley University.

Michael Roth, President, Wesleyan University. Michael Roth became the 16th president of Wesleyan University on July 1, 2007. Formerly president of California College of the Arts, Roth is known as a historian, curator, author and public advocate for liberal education. Roth describes his scholarly interests as centered on "how people make sense of the past." Roth’s call for a “pragmatic liberal education” is the cornerstone of both his scholarship and his administrative work at Wesleyan.