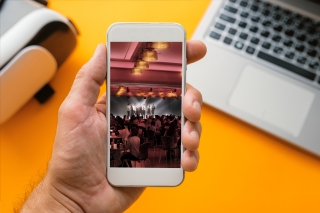 Explore the intersection between Art, Architecture & Technology with Yale Schwarzman Center, all in Augmented Reality.

YSC and the Center for Collaborative Arts and Media (CCAM) Project Fellowship are pleased to launch the second episode of the Augmented Reality Experience At Schwarzman (AREAS). Featuring scenes from Yale Men's Basketball and works by Yale Undergraduate Jazz Collective and Doox of Yale, the second installment of the AREAS series is a multi-sensory journey through The Underground. To enjoy this program, download the AREAS app from the Apple App Store or Google Play app store.

Non-interactive, 2D video renderings of the episode with closed captioning and audio descriptions are also be available:

AREAS is an immersive, virtual journey that animates the dynamic spaces of YSC through student-led and produced art, music, dance, architecture, and performance. Take a 360-degree exploration of the refurbished Dome, the newly-minted Underground, and the unmissable heart of campus, Commons. Look for scannable AREAS posters around campus and in New Haven's downtown, Westville, East Rock, and Hill communities. Three episodes of AREAS will be released through fall 2021, offering multiple chances to experience, meet, collaborate, and eat—virtually.

AREAS is designed by the Yale Student Immersive Media collective—an initiative founded in 2019 by students in the Arts, Computer Science and Computing and the Arts disciplines with support from CCAM’s Blended Reality program , which aims to blur the lines between the physical and digital worlds, “easing the transition of an idea from imagination, to design, to realization.” Read more about AREAS in Yale Daily News.

Featured image: "Mock up smartphone screen" displaying artist's rendering of an a cappella performance on The Underground stage.