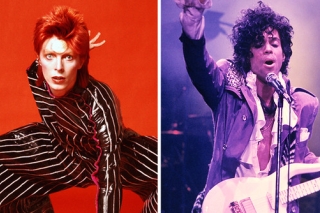 A look back at the 2017 event that brought together scholars, musicians, filmmakers, artists, journalists, and students for discussion, critical listening, and musical performance.

Celebrating the work of David Bowie and Prince, "Blackstar Rising & The Purple Reign" explored the careers of two singular musicians who changed the face of popular music culture in the second half of the twentieth century. The Yale Schwarzman Center preview event, which took place January 25-28, 2017, brought together scholars, musicians, filmmakers, artists, journalists, and students for discussion, critical listening, and musical performance. This event examined the pathbreaking innovations of the remarkable musicians, and explored the legacies of two artists who recognized the ways that popular music can create liberating spaces where audacious cultural and social changes and transformations might flourish. Lectures and roundtable discussions examined how Bowie and Prince each championed aesthetic, social, and cultural freedom and rule-breaking in their respective repertoires and ultimately revolutionized racial, gender, and sexual identity politics in popular music culture. The event culminated in a concert featuring the band TV On The Radio.