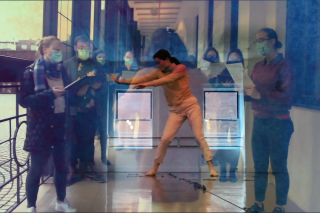 How can we traverse the ‘language’ barriers in order to fully appreciate each others’ art forms?

By Maura Tuffy (she/her/hers), Yale School of Music/Institute of Sacred Music, Class of 2021/2022

Combining Purcell's Hear My Prayer and improvised dance opened an opportunity to explore that question “How can we traverse the ‘language’ barriers in order to fully appreciate each others’ art forms?” Eight Yale students and alumni gathered together to record behind the Connecticut Financial Center, a surprisingly reverberant space. The dancer, Madison Vomastek, improvised movement to the recording and this all was tied together through video design by Yale projection design student, Camilla Tassi. Improvised movement creates a stronger sense of artistic dialogue, especially because improvisation is naturally reactionary. Adding dance to sacred music performance can effectively physicalize the emotion of a piece of music, providing a visual storytelling approach.

This project seeks to redefine how we study, practice, and intentionally intersect our art forms for necessary innovation. By marrying sacred choral music and dance, we create a new performance paradigm where both art forms are elevated by the context of the other. Additionally, we are shedding light on the rarity of sacred choral music and dance in conversation. Understanding that dance is the physical and visual story, of which music provides that ground, elevates both out of a conventional performance narrative. There is meaning to both parts—sacred choral singing and dance—and when combined, there is a vehicle for understanding the depth of art in a striking way.

This work was completed from October to November 2020.

About the artist and collaborators

Maura Tuffy is a soprano and conductor whose mission is to catalyze collaboration across all artistic fields. She holds degrees in Vocal Arts and Choral Music from the University of Southern California and is currently pursuing a Master of Music in Choral Conducting at the Yale School of Music/Institute of Sacred Music. Through her art, Maura aspires to cultivate progressive change in the arts and strengthen the ties of musicians to the communities they serve.

Madison Vomastek is a graduate of the inaugural class from the University of Southern California’s Glorya Kaufman School of Dance under the artistic direction of William Forsythe and Jodie Gates. She has performed repertoire by Alejandro Cerrudo, Aszure Barton, Crystal Pite, d. Sabela Grimes, Dwight Rhoden, Jodie Gates, Jiri Kylian, Martha Graham, Moncel E. Durden, Sonya Tayeh, and William Forsythe. She performed leading roles in USC Kaufman’s New York City debut at the Joyce Theatre. Upon graduation she landed the role of Velma in the 2020 revival of West Side Story on Broadway choreographed by Anne Teresa De Keersmaeker. The show is currently on hiatus due to the COVID-19 pandemic. Madison is a dancer, educator, critical thinker, community organizer, practitioner of mindfulness, advocate for climate and social justice, and artist leader.

Return to the Virtual Gallery foyer.