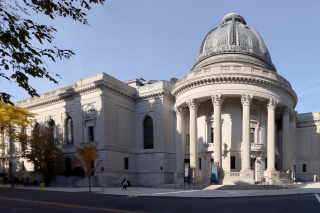 Woolsey Hall occupies the building that adjoins Yale Schwarzman Center along College Street. Because it shares its façade with YSC, the 2,650-seat concert auditorium is also one of Yale’s Bicentennial Buildings and can be accessed through the Rotunda at the corner of College and Grove Streets—a common connector for Woolsey Hall, Memorial Hall, YSC, and Hewitt Quadrangle. Woolsey Hall is used extensively and primarily for official University functions and musical events with few exceptions. Looming above and behind the Woolsey Hall stage (shown in the photos below) is the Newberry Memorial Organ, one of the most renowned Romantic organs in the world.