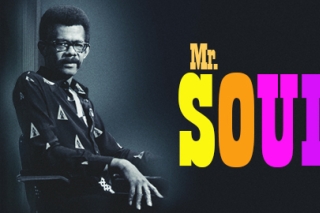 On March 25, 2021, the Afro-American Cultural Center and YSC hosted an online screening of the award-winning documentary followed by this livestreamed conversation with writer/director and former New Haven resident Melissa Haizlip and Yale Professors Thomas Allen Harris and Daphne A. Brooks.

Before Oprah, before Arsenio, there was Mr. SOUL! Ellis Haizlip ensures the Revolution will be televised with SOUL!, America’s first “Black Tonight Show.”

From 1968 to 1973, the public television variety show SOUL!, guided by the enigmatic producer and host Ellis Haizlip, offered an unfiltered, uncompromising celebration of Black literature, poetry, music, and politics—voices that had few other options for national exposure, and, as a result, found the program an improbable place to call home.

The series was among the first to provide expanded images of African Americans on television, shifting the gaze from inner-city poverty and violence to the vibrancy of the Black Arts Movement. With participants’ recollections and illuminating archival clips, Mr. SOUL! captures a critical moment in culture whose impact continues to resonate, and an unsung hero whose voice we need now more than ever to restore the SOUL of a nation.

Learn more about the film.