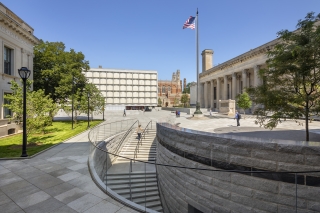 Hewitt University Quadrangle, the space that knits these landmarks together, is Yale University’s main plaza. Originally named University Court in 1917 and colloquially referred to as Beinecke Plaza, Hewitt Quadrangle has caused many a jaw-drop as guests passing from the street side through the Rotunda have experienced the space for the first time. Time itself is rendered powerless on the Quadrangle: the Beaux-Arts neoclassical colonnade of Commons meets the Modernist Vermont marble façade of the Beinecke. A quasi-extension of the Memorial Rotunda just in front of the colonnade reminds passersby of Yale alums who served in World War I.